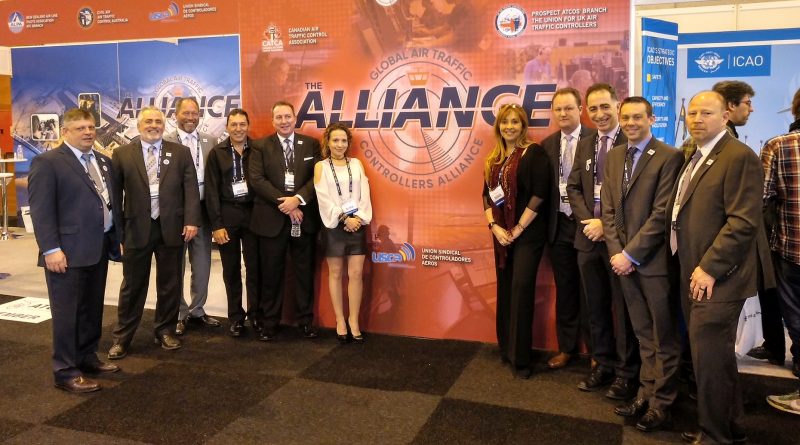 Main Public
March 8, 2018March 27, 2018 Paul Beard 2178 Views 0 Comments
Prospect ATCOs’ Branch announced a new global coalition of six labour unions at the World ATM Congress (WAC) in Madrid in March 2018 called ‘Global Air Traffic Controllers’ Alliance’ (more information about which can be found here). The other five associations are NATCA (USA), CATCA (Canada), NZALPA (New Zealand) Civil Air (Australia) and USCA (Spain).
The WAC is the world’s largest air traffic management event with thousands of aviation professionals from industry to professional staff organisations in attendance at three days of conferences, product demonstrations, launches and promotion of their area of expertise. This year there were a record 237 exhibitors registered of which the ‘Alliance’ and our joint stand was one.
The announcement of this new powerful force acting in the interests of us the ATM workers grabbed a lot of attention from employer and industry representatives alike. Some notable organisations who approached our stand during the course of the WAC include NAVCANatm, Searidge, Aireon, Airways (New Zealand ANSP), LFV (Swedish ANSP), and skyGuide (Swiss ANSP).
These appointed representatives of what are very influential organisations in their respective field welcomed this new venture and two even expressed their interest in becoming an industry partner to better understand the views of the members we represent.
The ‘Alliance’ is of course very encouraged by the reception we received in Madrid and we see it as a confirmation of the value of the expertise and knowledge that we bring to discussions that directly affect our members and the power we have to help shape the future of the industry by acting in solidarity together.
The photograph above shows representatives of some of the founding members of the ‘Alliance’.
Branch Executive
Prospect ATCOs’ Branch
March 2018